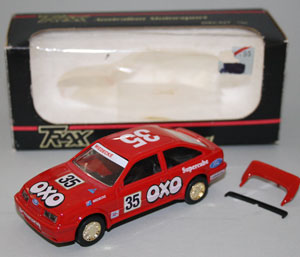 Above: The Trax Sierra’s came in a cardboard window box with a foam insert to secure the model. The rear wing and spoiler were separate items that had to be attached by the collector.

Above: Undo one screw and it comes apart easily. The seat, dash and interior insert are glued to the base plate, which is plastic on these models. 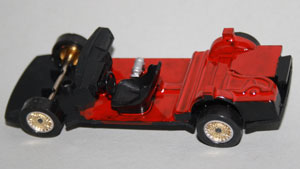 Above: The model is LHD whereas the real car was RHD, which is something that I was not going to bother correcting. A quick flick of red for the floor at least made the interior the right colour. Wheels received chrome-silver rim edges and gun-metal centres. 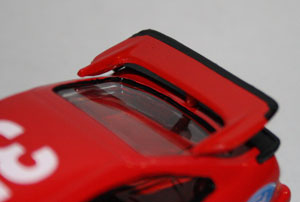 Above: The rear wing needed a black rear edge. While I brush painted the window frames by hand, this technique would have been too hard to get a straight edge for on the wing. I had some clear decal film left over from another project, so painted some of this in semi-gloss black, cut out the desired shape and applied it as per any other waterslide decal. Amazingly, the paint (Tamiya) didn’t crack! 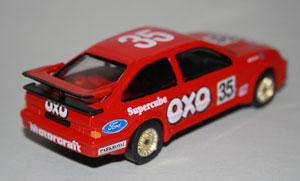 Above: At some events an additional lower deck spoiler was used (as seen fitted here) while at others it wasn’t. I am guessing this was due to the changing Grp A rules/homologations for the Sierra during its lifespan. 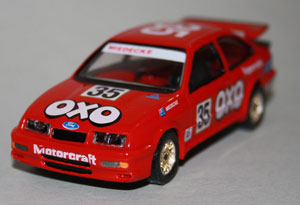 Above: Indicators and blackouts on front bumper painted by hand. There should be further decoration on this model, eg, Castrol logos on the headlights, OXO for the rear wing etc, but I’m not set up to manufacture decals. 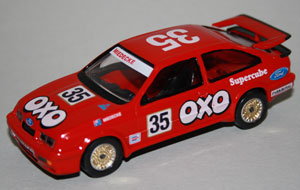 Above: Finished ‘Code-3’ enhancement. Not 100% accurate, but better than the original.