Here’s a tip – whenever you receive your decals, check them against the actual model! I bought these ones from Patto’s Place well over a year ago. When it was time to decal the model, I cut the first one (the black windscreen sun-strip) and it was fine. Then I moved onto the multi-coloured decal on the bonnet at the base of the windscreen. Cut it out, placed it on the bonnet to check and – Oh Dear! The curvature was way out!

I don’t know what AU Falcon Patto has based this set on (a slot car, perhaps?), but they don’t fit any of the Classic Carlectables AUs; not the early casting, the “second generation” casting or the last one that had all the interior detail. This was a massive disappointment. When I purchased the decals I realised they were not totally complete (missing the Shell Series above the race number, the windscreen number, Ford badge on the splitter, minor sponsors on lower side skirts, series decals in rear quarter window, roof number etc) but I figured they would at least fit the car.

Anyway, on with the show… The instructions recommended a coat of clear to strengthen the decal. I snipped a bit of clear film off the sheet and tried applying it to an old donor model, but it disintegrated while sliding it off the backing sheet! I therefore gave TWO coats of clear instead of the recommended one. This did strengthen the decals, but meant I had difficulty getting them to follow some of the body curves. This is where the decals in Tamiya kits are excellent. They’re rather tough and with gentle manipulation they can be subtley stretched and snuggle down on complex curves and bumps (like bolt and rivel heads) with a little decal softener (I use Mr Mark Softer from Gunze Sangyo – great stuff!).

If I did a Wixy500 rating on this as a commercial offering, I’d bag it out big time. It’s built on the old bare-basics Classics casting, the decals are incomplete and my application has resulted in several tears and crinkles. But sitting in the cabinet with the other cars from 2000, it is far from out of place. 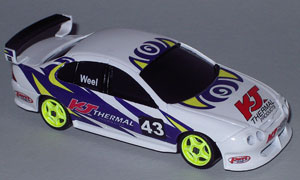 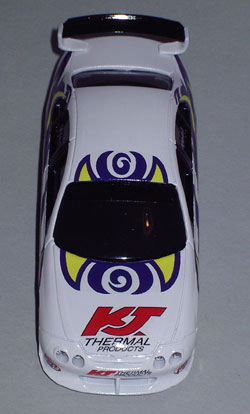