This is the initial ‘press launch’ version of the first car produced by the new Brazilian Copersucar team. While Spark identify the car as 1975, my references indicate it was actually presented in October 1974.

Designed by Richard Divila, constructed in Brazil and sponsored by a Brazilian sugar company (Copersucar), it was a very unusual shape for an F1 car and looked very futuristic for the time.

It had wind-tunnel inspired lines that featured all-enveloping rear bodywork that housed radiators well behind the rear axle. It also had side-exit exhausts and full width front wing over a dished wedge nose.

The car was uncompetitive, so much so that when the second and third chassis were produced, most of the superfluous bodywork had been discarded and the radiators re-positioned ahead of the rear wheels.

The FD01 (F for Fittipaldi, D for Divina) was the first of several cars the team constructed. Most of their cars did manage to score a world championship point or two, but there were no race wins.

Renamed as Fittipaldi in 1980, the team stumbled through several Grand Prix seasons before exiting F1 at the end of 1982.

This item from Spark has a good paint finish, but the components that are plated or polished alloy (ie, rims and suspension arms) are the usual Spark dullish silver.

Body shape and markings generally reflect the press photos of the time. Close inspection reveals mould lines on some of the suspension arms, plus some very minor decal misalignment around the big ducts at the rear.

There is no engine detail because it’s all covered by bodywork. 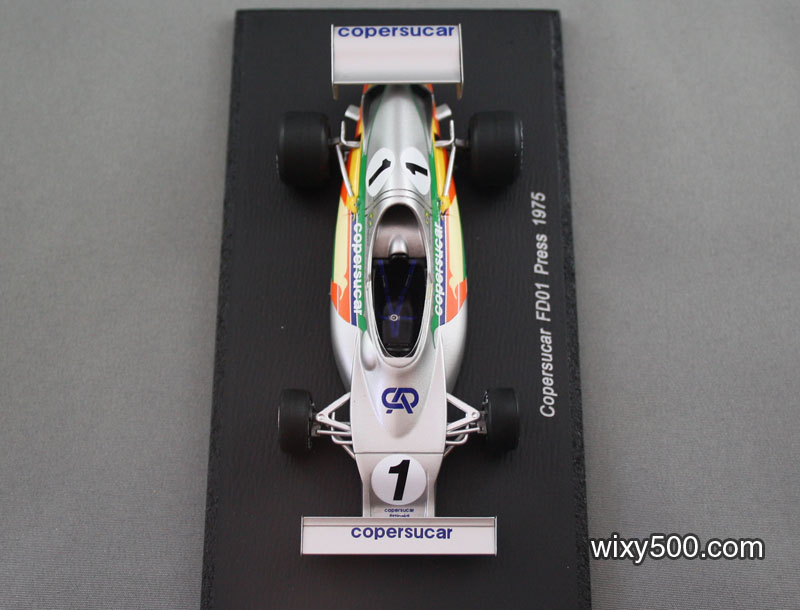 Images in this article were either (a) taken by me, or (b) are in the public domain on multiple websites or shared via social media. If I’ve used an image that you have the copyright to, let me know and I’ll give appropriate credit, or remove it. 🙂