This is the 1980 Penske PC9 #12 of Bill Alsup produced by Ertl. I bought this off ebay. The box is pretty shabby, but the model is fine. 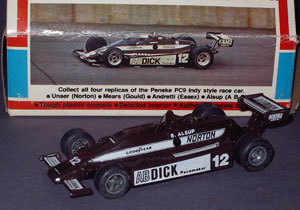 It is one of an original 4 cars released of 1980 Penske Indy cars (Bobby Unser, Rick Mears, Mario Andretti and Bill Alsup – there’s also a #7 version of Alsup’s).

The models are rather crude compared to today’s but reflect an item that’s a bit better than a toy of the time, but not a true scale replica. The body colour on all 4 cars is too dark when compared to pictures of the real vehicles.

Construction is a diecast top body attached to black plastic base plate (which features ground effect venturi tunnels), 2 x solid axles and thick self-adhesive stickers for decoration – that dont include all the markings. Tyres have raised Goodyear lettering.