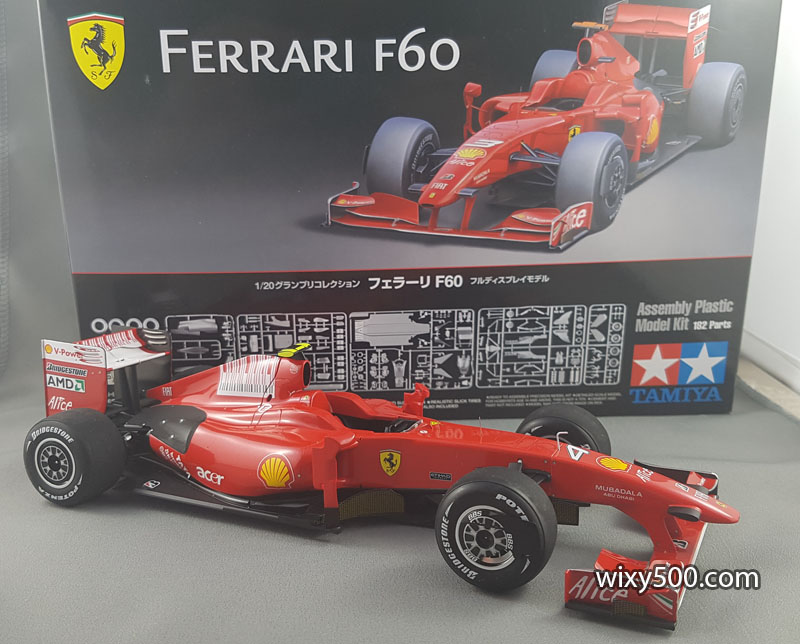 I decided it was time to tackle a kit of a modern day subject, so grabbed this F60 from the stash – only to realise it was already over ten years old! I really do need to get cracking with some of those older kits…

2009 ushered in a new set of rules for Formula One. Slick tyres were back (they’d used grooved rubber since 1998) and regulations allowed for ridiculously wide front wings. The cars were long and retained the regulated “narrow track” width. In my opinion, they looked awkward and silly, and this Ferrari is up there as one of the ugliest race cars of all time.

The F60 (the designation to celebrate Ferrari’s 60th year in F1) was powered by a 2.4 litre naturally aspirated V8 engine with KERS, able to deploy short bursts of an extra 80 horsepower. It was fitted with a 7-speed semi-automatic sequential transmission. Ferrari positioned the rear-vision mirrors outboard, using the vertical mounts for aerodynamic gain. The car also featured wheel covers which were subsequently banned at the end of the year.

Overall, the F60 struggled to be truly competitive. Raikkonen managed to take victory at Spa in the Belgian GP, but a handful of podiums mid-season was all the car could achieve on its way to 4th in the Constructors’ Championship.

This is model #59 in Tamiya’s 1:20 Grand Prix series. From an engineering perspective, Tamiya did an excellent job on the fit on this model. The panel gaps are fine and everything pretty much lined up as it should during assembly. In fact, the near perfect fit has been a bit of an issue, damaging the paintwork when fitting or removing the sidepod covers.

The kit comes with markings for regular drivers Kimi Raikkonen (#4) and Felipe Mass (#3). Giancarlo Fisichella and Luca Badoer also raced the F60 after Massa was injured at the Hungarian GP, but there are no decals for either – most likely because in-season development saw the car specification change so much by then that building this kit for those drivers would be inaccurate.

Having said that, the car never raced as illustrated on the box! From what I can tell, the kit most closely matches the configuration ran at the Australian Grand Prix – with the exception of the sponsorship markings on the engine cover and rear wing which Tamiya did not bother to include.