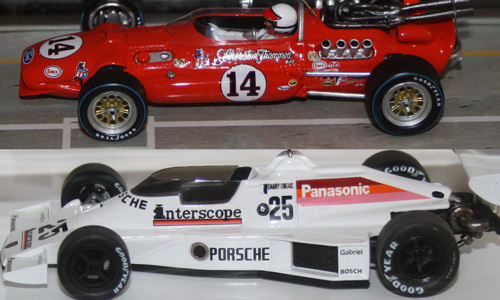 This week saw the addition of two “Indycar” models to the collection that enjoyed widely differing success – one won the 500 while the other was ruled out before it even qualified!

From Spark is the 1967 winning Coyote of AJ Foyt. This forms part of Spark’s excellent Indianapolis 500 winners series.

Like all models from Spark, the finish on this model is excellent. However, like a couple of others in the Indy series (the winning 1980 Chaparral a case in point), there is something missing, but in this case, I’m not sure what it is (the Johnny Rutherford Chaparral had a few dimensional issues that were obvious when compared to photos of the real car). To me, it doesn’t quite capture the character of a 1967 Indianapolis racer. Is it the cockpit scuttle is too high or wide? Or is the rake of the suspension arms not accurate? Or is it the chrome components have been modeled in silver rather than plated/polished?

At appears Spark has based the model off the car that sits in the famous museum at the track as the placement of the contingency sponsor decals is identical. However, the car in the museum has white exhausts (but who’s to say the museum car has been restored to be race-day accurate? White exhausts were fitted for the qualifying day photo, but I’ve found it hard to find race day photos of this car. The official ‘race winner’ photo has chromed exhausts and completely different wheels and tyres!).

The white Porsche Type 940 of Danny Ongais is by TSM – which means it is ridiculously over priced for what is essentially a Spark-spec model. Again, finish is excellent and I reckon it captures the lines of the real car very well.

The issue of what is correct decoration (signage and logos) is difficult for this one as the car never raced. The model is similar to how the car lives today.

The back-story to this car is interesting. Porsche announced their intention to race at Indianapolis in 1980 with Interscope Racing. A turbocharged flat-6 Le-Mans based Porsche engine was fitted to a Parnelli chassis. It was all rather secretive but the car was fast and is said to have turned record laps at the Ontario Motor Speedway. Last-minute rule changes deemed the car ineligible, leading to Porsche cancelling the entire project a month prior to the ‘500. It’s an interesting read  – Google it for more.