This was the first year of competition for the Arrows F1 team, made up of key personnel from Shadow.

The Arrows FA1 was basically a clone of the Shadow DN9. In fact, part way through the season the FA1, which had proven reasonably competitive straight away, was banned from competition by court order and the cars had to be dismantled.

Arrows had pre-empted this and had already designed and built another iteration – the A1 – which they turned up with at the very next race! The A1 had, among other things, revised sidepods, rear wing and a narrower “twin-nostril” nose.

I reckon Spark will end up doing the A1 as well, because they’ll be able to milk the mould for 1978 and 1979 versions.

Anyway, back to the FA1!

This model has excellent glossy gold paint and decal decoration is very good too. The fine black striping on my version is pretty damn good. The driver figure has the correct pinstripe race suit for Riccardo Patrese and even has the air bottle tube to his helmet. 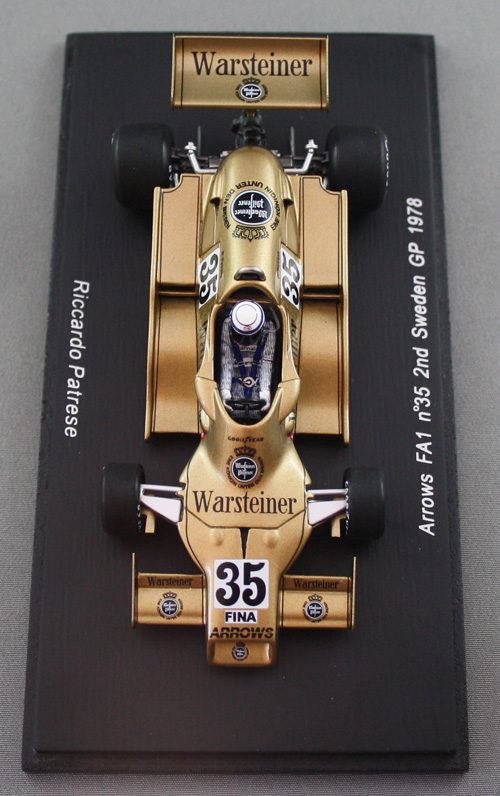 However, the model has a fundamental design flaw – the front of the chassis is too bulky and too high, so much so that the top rocker arms of the front suspension don’t even line up with the bodywork!

And no, it’s not an assembly problem on my example. Spark’s own photos show the same issue and all the other releases of this car have the same error.

Overall, it’s not a bad model, let down by the design flaw.

I own the white Brazil GP version and Spark has correctly modeled a number of subtle bodywork differences (engine cover air scoops, duct on scuttle, front wing endplate shape) however the front rims don’t match any of the photos I’ve seen.