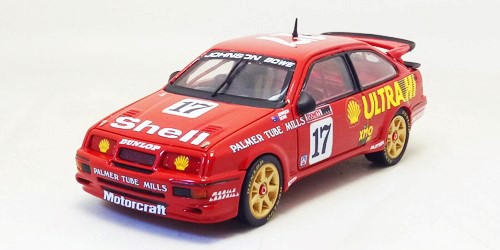 Apex Replicas has announced the pending production of two famous Bathurst 1000 winners in 1/43 scale – Peter Brock’s Torana GTR XU-1 from 1972 (the final Bathurst win by a single driver), plus the Dick Johnson/John Bowe Ford Sierra from 1989.

The company has stated these are “the biggest 1:43 scale model announcements so far from Apex Replicas”.

Being in the international standard 1-43rd scale and of popular drivers with international profile, it’s likely there will be strong demand from overseas buyers.

“At times collectors of 1:43 scale models may feel a bit left out given Australia is very much a 1:18 scale nation. 1:43 is definitely in the shadow of its 1:18 scale cousins. That doesn’t mean there’s no big news for collectors of the ‘world scale’ though.

“We are very excited to announce the pending production of two of the most talked-about 1:43 scale models in recent memory. We have had request after request for these cars but we have had to hold off on making any announcements… until now.”

Both models will be produced shortly and due for delivery prior to Christmas.  Manufactured in resin, they will be limited edition (numbers set by order quantities received) and retail for $88AUS each.