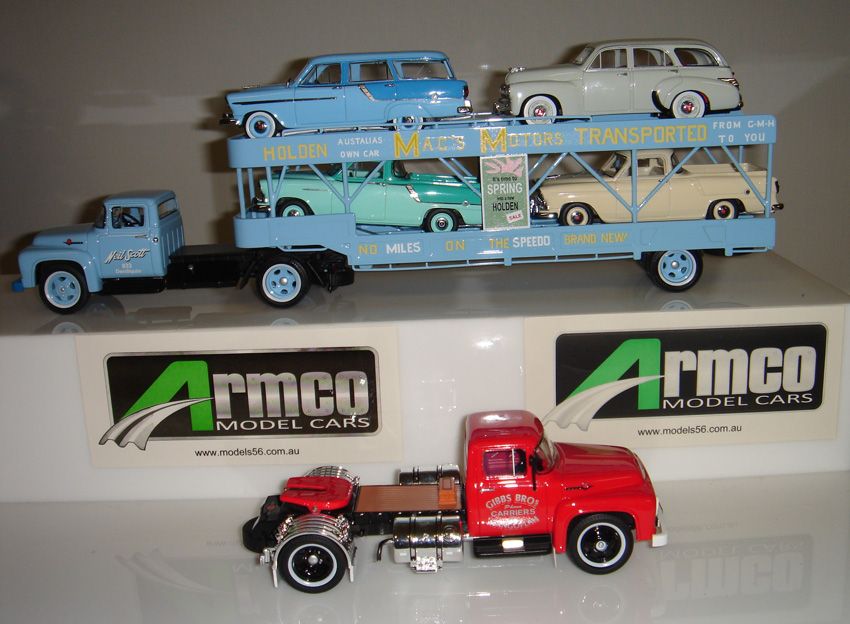 I’m not into trucks (unless they’re loaded up with race cars!) but thought I’d share these two new and very limited pieces from boutique Australian manufacturer, Models56.

The first is a 1956 Ford F600 Car Transporter, limited to 300 numbered units worldwide. The other is a Gibbs Brothers 1956 Ford (limited to just 100 units), which has a tragic back-story to it.  Both are 1/43 scale resin and, the company warns, require very delicate handling!

In the late fifties when you brought a new car and you lived in the bush often a salesman would drive the car to you. It would arrive with stone chips and covered in dust so Neil decided to start transporting the cars to a dealership closest to where you live and you could take delivery of your new Holden and as the truck advertises “no miles on the speedo brand new” and “from GMH to you”.

You will also notice Australia (Austalia) is spelt wrong and that is why the model carries this error as did the real truck.

Inducted into the Shell Rimula Wall of Fame at Reunion 2009, Neil Scott was born in Balranald and was raised on the family-owned station at Clare (north of Balranald) until he moved to Deniliquin in 1950. It was in Deniliquin where he purchased his first truck, a WC22 White with a 2-deck sheep crate and trailer.

Not long after that he also purchased a Bedford tray-truck and that started what became known as Neil Scotts Transport Pty Ltd. He married Olive in 1954 and they had three children Bruce, Wayne and Lynda, who in later years, worked within the business.

In the following years Neil Scott’s Transport Pty Ltd grew to employing eight drivers and comprised eight vehicles. These included Whites, Fords, Internationals, Dodges and Mercedes Benz. During this period the company carted mainly livestock but also had a contract to cart fuel to Deniliquin and Hay for Shell as well as carrying new Holden cars from Dandenong to the local dealership. His favourite trucks would have been the Mercedes Benz; they were reliable and inexpensive to run. In the 70s and early 80s the older trucks were phased out and a new breed of truck introduced. These included Volvos, Fords, T Line Internationals and Kenworths. He was one of the first in NSW and Victoria to use tri-axle and drop-deck trailers in livestock cartage. The drop-deck crates were excellent to minimise injury to cattle because of the high deck and provided room for three decks of sheep.

The second truck belongs to Des Gibbs. Now this is a sad story but an amazing testament of labour and huge expense and I will let you read the rest;

“Gibbs Bros 1956 Ford. Lovingly restored in memory of my father, Wilfred (42), brother Anthony (21) and cousin Bill Aylett (16). They were tragically killed in July 1959 on the Olympic Highway between Yerong Creek and Henty with a load of cattle bound for Wodonga, which was a regular trip. The trip was to be the last for this truck, as a new Commer Diesel Prime Mover was to be picked up the next day. Gibbs Bros. ran a successful Livestock & General Transport business from Mangoplah (between Wagga Wagga & Holbrook, NSW). Mechanical failure and wet miserable conditions caused the accident which resulted in the Prime Mover being totally destroyed after hitting a tree and burning. Total re-build & restoration took approx. 18 months to complete and was carried out by myself with help from family and friends. It was finished in July 2009 to commemorate the 50 year anniversary of their deaths.” – Des Gibbs

This truck to date has won over fifty major trophies in every show it has entered.