This is the Tyrrell 011 that was used for most of the 1983 season. It arrived as a “gift” with another model I purchased off ebay a couple of years ago. I couldn’t do much with it until some replacement decals were sourced, after which I was able to rebuild it, pretty much from scratch.

The registration of the replacement decals is not as good as the old yellowed ones on the model, but hopefully the car as a whole will look better once rebuilt and repainted.

There were a few different variations of the ‘011 during the 1983 season. My version will be as per FDS modeled, which I believe is from very early in the year: the rear wing top element is black (not green), the body is all green (in some races the bottom half of the monocoque sides were black), the exhausts exit low, under the driveshafts (in most photos of the real car, they exit over the top of the rear suspension). I think FDS got the rear suspension wrong as the model has top rocker arms suitable for springs mounted behind the driveshaft, whereas the 011 had the rocker arm and spring in front of the driveshaft. Tameo has also modeled this car and it is a far superior version with a better and more accurate casting, the high exhausts, correct suspension, etc. 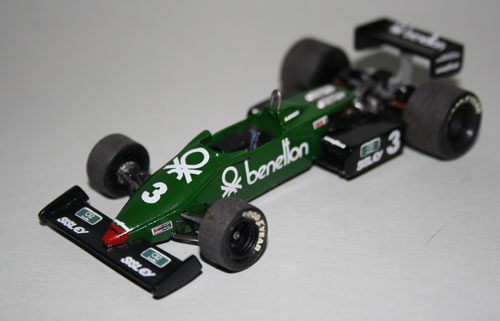