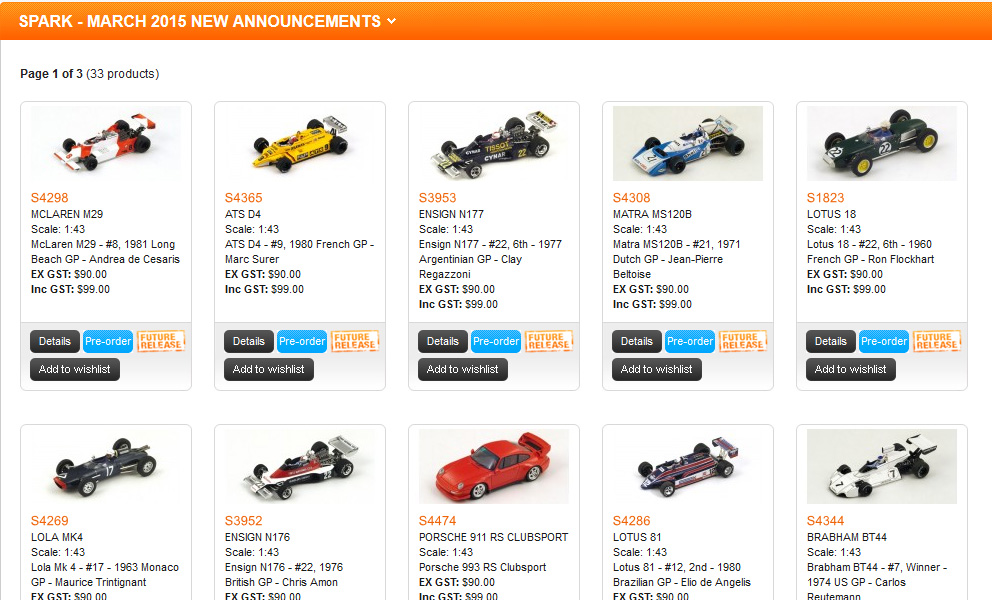 Alarmingly, there has been significant prices rises which will surely impact sales.

From a personal perspective, it’s going to reduce what I’m buying. $100 for a 1/43 scale model (or $140 for some of the Minichamps!) is out of control. Might be time to attack that stash of kits rather than buying pre-built models!

Minichamps have announced their initial range of 2015 Formula One cars.

This year the models are broken up into three separate ranges and price points.

The only 1:18 offerings are diecast models of the two Mercedes F1 W06 Hybrids from the Australian GP, Winner Lewis Hamilton and Nico Rosberg (2nd).

The diecast 1:43 range consists of the season cars from Mercedes-Benz and McLaren Honda with cars for Button, Alonso, and Magnussen.

In the 1:43 scale resin range we have cars from Red Bull (including Daniel Ricciardo), Williams, Force India, Toro Rosso, Lotus and Sauber, then limited edition versions of the two Mercedes from the Malaysian GP; Hamilton (1st) and Rosberg (3rd).

We’ve split the models into two groups to make them easier to work through: One contains 18 WRC models from the 2015 Monte Carlo Rally, while the other has 33 items comprising classic and contemporary Formula One cars, Le Mans racers and road cars. The F1 models are particularly strong with some big names present: Stewart, Ireland, Rodgriguez, Hunt, Amon, Regazzoni, Montoya and more.