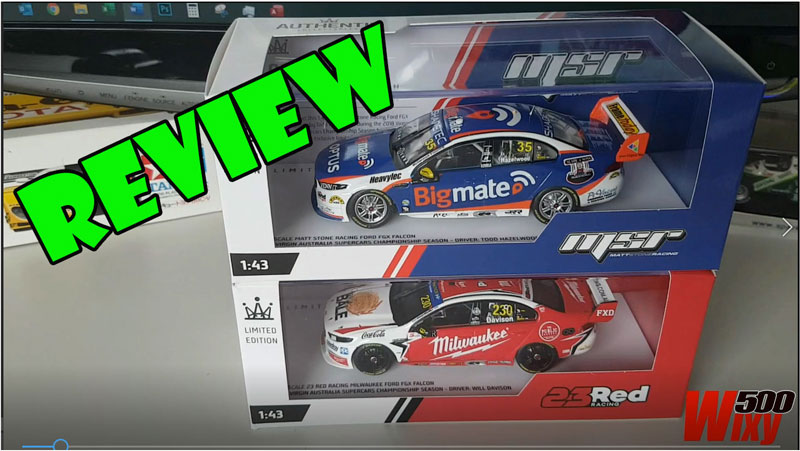 I received these in February but only got to inspect them in March – and the one with the missing part was by then already out of stock, so there was no point contacting Authentic for a replacement.

As per their Holden’s, Authentic’s 1:43 scale diecast Falcons have a very Biante-ish feel to them regarding molds, assembly and engineering (perhaps they come out of the same factory?).

Overall, they look very good – nice paint, decent decals, interior with rollcage and cockpit fit-out, some underbody detail, brake discs, racey stance and cambered wheels. Box-art is unique for each car and the models come mounted on a plinth inside a display case.

But, like my 2017 Bathurst winner (see review HERE), there are some quality control issues that should not be happening on an $80 model…

This model represents the first season for the Milwaukee/23Red Racing team that was created out of Lucas Dambrell Motorsport after Phil Munday purchased a 60% stake and re-branded it.

The car was built by Prodrive and driven by new recruit Will Davison, who had moved over from Tekno. Davison finished 15th in the championship with a best result of 7th, which he achieved three times.

For its first season in the ‘main game’, Matt Stone Racing fielded newcomer Todd Hazelwood. For the first ten rounds, the team ran a DJR/Penske-built FGX Falcon before switching to a ZB Commodore for the final six. It’s the Falcon that Authentic has modeled.

Hazelwood finished 26th in the championship with a best result of 13th (at the final round in Newcastle driving the Commodore). Best result in the Falcon was an 18th at the AGP round.

This model is a limited edition of just 192 pieces and quickly sold out from the manufacturer’s website.