Biante will this week release a new addition to the 1:43 scale Motor Racing Legends collection – the Ford EB Falcon driven by Glenn Seton to win the 1993 Australian Touring Car Championship.

Produced in resin in a limited edition of 534 pieces, this model will be available to purchase from August 1.

Further Biante releases – from manufacturers such as Sun Star, Vitesse and Kyosho – are listed below. 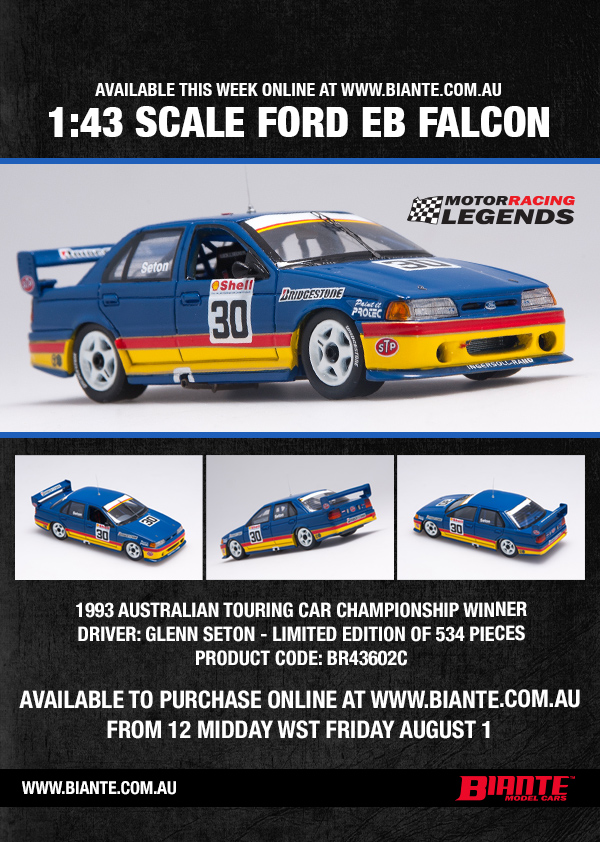 The introduction of five-litre regulations for the 1993 Australian Touring Car Championship saw the return of a V8-powered Falcon to the series for the first time since 1984. But it was in late 1992 that the first winged Falcons and Commodores appeared as a prelude to the new rules that would eventually morph into V8 Supercars. Glenn Seton’s Peter Jackson Racing squad was the first to race one of the new-specification Falcons at the 1992 Sandown 500 in Melbourne and, while brake problems sidelined the car in its first event, it helped put Seton’s team a few steps in front of other teams heading into what would turn out to be a very successful 1993.

For the new season the team built two new cars for Seton (driving GSR3) and Alan Jones (GSR2), who had signed late the season before and drove the #35 entry in ’93. The chase for the championship began at the now defunct Amaroo Park in Sydney and, while John Bowe claimed the honours of being the first to win in the ‘new V8 era’, Seton finished third just three points behind.

The next round at Symmons Plains saw Seton lose ground, his Falcon failing to finish the second race with power steering pump problems. But he bounced back in brilliant fashion in the next round on his home track at Phillip Island, and the opposition didn’t see which way he went. The #30 Falcon driver qualified fastest (though was pipped for pole in the Dash for Cash by Dick Johnson) and went on to claim both race wins in style.

A fourth place at Lakeside was off-set by the fact teammate Jones won the round, before Seton clean-swept both races at another Victorian venue, Winton, and then took another clean sweep in the next round at Eastern Creek in Sydney. All of the Commodore teams had modifications to their aerodynamics package at the Eastern Creek round and for the remainder of the season the Gibson Motorsport-run Winfield Commodores of Jim Richards and Mark Skaife were the form cars.

Seton and Skaife shared the race wins at Mallala though Seton claimed the round and was inching closer to his first Australian Touring Car Championship. He would seal the title in the second race of the penultimate round at Barbagallo in Perth given both his title rivals had problems. John Bowe was eliminated in a first corner accident and buried in the sand, while teammate Jones struggled to finish sixth.

The fact that Seton ran off the road on lap four and was buried in the sand didn’t change things and he could not be beaten for the championship heading into the final round at Oran Park. However, a pre-Oran Park testing accident at Phillip Island destroyed Jones’ car (with former works Toyota touring car driver Drew Price at the wheel), forcing the team to move him into Seton’s title winner (GSR3) and Seton to debut a new chassis (GSR4).

Seton finished fourth for the round and Jones sixth, though it was enough for the former F1 World Champion to claim second in the championship and give the Peter Jackson team a 1-2 finish to round out the sprint season.

All up, Seton won seven of the 18 races in the 1993 championship, four of the nine rounds and did it all without claiming a pole position for the entire season! The championship was his first of two for the second-generation racing star, the Hall of Famer going on to claim another title in 1997.