These three early Classic Carlectable “bricks” (as they are often referred to due to their basic nature) were not going into my display cabinet until they had been tarted up a bit. 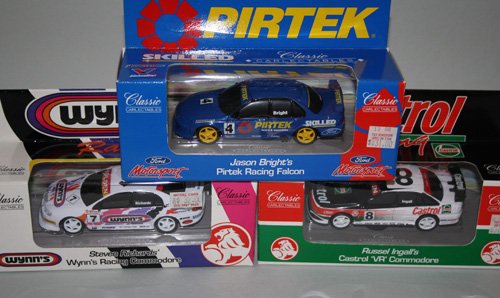 These models came with extra decoration that needed to be applied by the collector. The Castrol Commodore and Pirtek Falcon included a sheet of self-adhesive stickers (overly thick, overly stiff, clear vinyl with printed decoration that had to be cut out), while the Wynns car had a sheet of waterslide decals.

Before and After: Steven Richards’ VT Commodore from 1999. Work done – Wheel nuts filed down and painted; extra decals applied (about 14 on this one); front radiator and brake intakes blackened out.

Before & After: Russell Ingall’s VR Commodore from 1997. Work done – Wheel nuts filed down and painted; extra stickers applied; front grill nostrils blackened out; head and tail lights painted; green and red touch-ups on livery and under front gaurds where white was showing.

Some collectors don’t agree with what I do to some of my models, believing that collectables should stay in their boxes and remain in their ‘factory’ condition for eternity.

1. I think these models which, let’s be honest, are pretty crappy by today’s standards, look better after my little enhancement jobs, and…

2. They are MY models, in MY collection and I’ll do whatever I want with them!